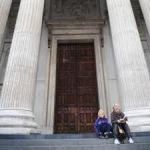 Not drama, just plain ridiculous irony or more correctly ironies – a disgrace to the good news as proclaimed by the very person after whom the Cathedral is named (St. Paul’s). No wonder, the world is still waiting to believe those of us who call ourselves Christians.

Irony number 1 (more like a lie): a place of worship closing its mighty doors, because a few people think there are health and safety issues and it is unsafe. This is what some would have us think, until others have shown that actually this is not the case, and among the protesters there are those as baffled as those viewing the situation from a distance as are some of the tourists.  They might as well put up a sign: “Closed for Business” or “No Room in the Inn”. What have we become?.

Which brings me to irony number 2: and this is the estimated loss of income being just over £20,000 per day! The love of money knows no limit and its deadly touch infiltrates even the “holy of holies”. Jesus driving the money changers out of the temple seems as timely as ever. Such disruptive protest, however, is not coming from St. Paul’s, but protestors (called all sorts of name) peacefully demonstrating against the ways that ‘mammon’ in its many incarnations and guises is slaughtering the multitudes. How can such a Church (meaning all of us who are part of any ecclesial tradition that behaves likewise) ever claim to walk the way of Jesus?

Yes Lord:  “when did we see you naked, thirsty, homeless, or closed the door in your face….?”

Forget souls and morality: £20,000 a day is one hell of a reason to stop seeing when, how and where!  So, “Abba in heaven…you stay put right there!!”