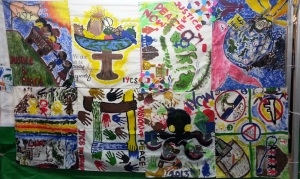 involved, here in the UK the Tory Party at its recently concluded Convention in Birmingham has launched their agenda to win our hearts and votes with their strapline of “securing a better future”. One can be excused for being cynical about any suggestion from governments about securing anything given, our track record for creating more insecurity, fear and for selfish motivations. The ordinary punters on the streets in Britain forced-fed with a staple diet of fear be it about Europe, muslims, terrorists, migrants, deadly diseases from geographical corners of the dead continue to grumble but largely looking on zombie-like having so internalised the “keep calm mantra” and “don’t panic” mantra.

So what about the Tory’s promise of securing a better future? Well readers can make up their own minds but in a nutshell (with a warning that you should read the speeches and presentations yourself), here are just a few of the promises:

Are you starting to feel more secure, if you are British and living in the UK?

Welcome to our new world of fear, fences and fibs. In the meantime, you may or may not have noticed that the soundtrack (not the political sound-bites!!) accompanying the Tory Party’s autumn conference was from a band called the killers. This, of course, is intended to make us all feel secure, especially the chorus “I’ve got soul” probably intended to whip up our enthusiasm.

The reality is that it takes a lot of searching among the rubble and rubbish to find any soul. And speaking of rubble, rubbish and soul, I was delighted to read George Monbiot’s observation on how “the humanitarian argument” advanced in our recent parliamentary debate raises serious questions as to the limit of where next governmenst would consider dropping their deadly and expensive bombs. As he noted: “the humanitarian argument…if consistently applied, could be used to flatten the entire Middle East and west Asia. By this means you could end all human suffering, liberating the people of these regions from the vale of tears in which they live”. Evil will be wiped out “by the destroying angels of the west”.

It is strange what our ‘air-shows by ‘boys with destructive toys’ are doing, not the least to galvanise and bring together rival and disparate groups of ‘marauding terror agents’ (also boys with toys). What are we actually perpetuating in the name of peace? When will the next ‘so called moderate group’ which we arm turn the weapons we have provided them upon us? What lessons have we learned? It seems that we have either lost the ability to learn and/or are unteachable. Whatever has become of our moral conscience in this never ending theatre of errors and tragedy?