It was certainly a feeling of Pentecost at the WCC Assembly, with so many churches from every “corner” of the world present – not to mention the “tongues”, the colours and the “wear”. The spirit of diversity was certainly around in the business sessions, worship, plenaries, workshops, exhibition hall (madang), in the corridor conversations, around the restaurant dining tables, at bible studies and in our ecumenical conversations. There were moments, though, when the tendencies of reverting to Babel threatened to de-rail the “spirit of ecumenical hospitality and diversity”. If only some of our conversations could have modelled the extravagant hospitality of our Korean hosts!

There were too many words at this gathering, so I have tried to find images to sum up my experience of the 10th Assembly of the WCC and in Busan. Here are a few: 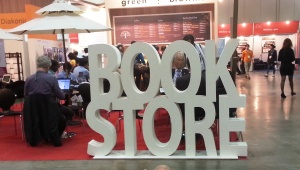 This is I titled: “where are the books? It was, of course behind the seating area – coffee shop 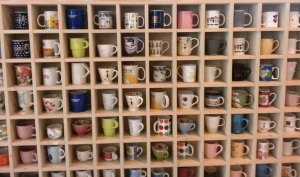 On a visit to the church of the moderator elect of the Presbyterian Church of Korea whose Love and Peace cafeteria had this collection of diverse mugs. I have titled it: “Mug Shots”, though “mugging the assembly” would be more how I felt at times given the “politicking”, some “perverse (inconsistent) theology”, and the neatly “boxed in ecclesiology” on display.

I was impressed with the collection of crosses on display. This I have titled “Europe’s Cross-ing” playing with idea of Europe’s colonial hegemony in their so-called “new world”. I wondered what sort of cross was stuck on the flag that was planted on the shores of the Caribbean. I have juxtaposed the collection I have titled Africa’s Crosses – much of which is still borne today, though hope is elicited from the very cross….

Two best expressions of a hopeful future are captured in these images. The painting by young adults disrupts the “ordered and safe” God-talk of Church leaders and the song/contribution by the Korean children moved us to tears of joy and hope. WCC should borrow their language, spontaneity and humility.